The Tokyo Development Learning Center called on Voilà: to communicate clearly its comparison of Tokyo’s start-up ecosystem to similar innovation hubs around the world.

Our challenge was to create intuitive visuals that presented this complex analysis of thousands of stakeholders and the relationships between them.

Given that this document is meant for screens (as opposed to print), we opted for a landscape orientation and bright colours. These colours draw the eye into the visuals and clarify the information contained in the networks by distinguishing it from the white background.

The layout of the report emphasizes the hierarchy of information within the report. At the top, the chapter headings are separated by a line, leaving room for the body of the text and its accompanying maps and figures.

Network graphs can quickly look like a jumble of rainbow spaghetti. It therefore requires a clear message and a careful structuring of information to make sense of the hundreds of points and lines.

In this example, we wanted to highlight the following message: specialist investors (in purple) predominate in New York, while non-specialists (in yellow) predominate in Tokyo. This distribution of colours is confirmed by a small bar chart under each of the network graphs.

In addition, to better reflect the original data, we have re-adjusted the scale between the two graphs so that the New York network is larger than the Tokyo one, something not automatically done by the software. 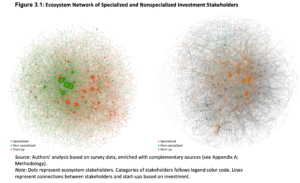 To appreciate the amount of information present in this kind of graph, here is the social network of the Tokyo start-up ecosystem, with its main influencing actors by category. You can see some large investors (red) and some large universities (yellow) in the middle of the network.

Here are some other examples of network graphs from the report that demonstrate the wide visual variety.

In contrast to the network graphs which use bright, contrasting colours, the quantitative charts found in the report are based on a fairly neutral colour palette with one red accent colour.

Here are some examples of quantitative charts. On a map, bubbles compare the number of start-ups in Tokyo to that of other major cities.

A slope chart contrasts Japan’s position in Science & Technology (first) with that in Venture Capital (21st).

A bump chart shows that from 2010 to 2019, Japan has moved from first to fourth place in patents. Two line charts show that patent applications have not increased in Japan.

Finally, an innovative stacked bar chart shows that in Tokyo, 36% of start-up founders come from only 3 universities, while in New York, 28% come from 10 universities.

We also developed an electronic presentation for the client, adapting the visuals to this medium.

In the example below, the size of some elements is enlarged and the level of detail is reduced, knowing that the audience will not have time to explore the visuals at length.

In this one, the explanation of the graph has been condensed as much as possible to allow the reader to immediately understand the main message of the visual. The graph itself is at the forefront of the layout.