This is the blog post that I wish I would have found when I got invited to speak at a data conference and decided to send them an inclusion rider for women and minorities. I hope this is how you found it.

(Also, obviously, I’m virtue signalling and if that bothers you, you can stop reading here.)

I was quite happy to be invited to speak about data visualization in front of a large crowd (turned out to be about around 150 people). It had been my goal recently to speak beyond my training classes, to be recognized not just for my expertise, but for my capacity to inspire others.

What I’m trying to say is that this was valuable to me. I was a tad hesitant to risk it with an inclusion rider — I’m no celebrity for whom a conference would bend over backwards. But I knew I couldn’t live with myself if I didn’t even try.

I had been inspired by the discussions in the film industry, but also by those in my field, notably by Jon Schwabish (here’s an insightful blog post about his attempt to foster diversity and inclusion at a conference). So on the same day that I accepted the invitation, I started looking around for resources with a call for examples on Twitter.

Hey Twitter, let’s have another discussion about inclusion riders.

Should it be an invitation to “make efforts” for diversity? Or a strict minimum? If so, how much? And who should be covered? Got examples?

I did not find a ready-made letter, so I wrote my own. I was inspired by that of Kyle McDonald and the Annenberg Inclusion Initiative of the University of Southern California School For communication and Journalism that provide a template (PDF) for the film industry.

My main challenge was to ask clearly enough without coming across as imposing on them. Perhaps I had every reason to be forceful because it’s the right thing, but I could only go as far as saying that this is important to me as I hoped it was to them, and I would like to know what they were doing about it. I drew my line at no more than 75% white man in the speakers line up, an easy threshold to clear given that they already had 26% women or minorities the previous year.

I shared my idea and draft with people close to me and all were supportive, except for one person who felt it is detrimental to open debates to take identity into account. We had a productive discussion where we saw better one another’s perspective and I’m happy to report that I did not lose this friend. Others were new to the idea and thought it was interesting and a step in the right direction. One person asked if I had enough star power to make such demands, and another wanted to know if I should be clearer in my letter as to the consequences if the conference was not diverse enough for my taste.

You can read my inclusion rider here, in English and in the original French. It took me a couple of hours to put it together.

Discussions with the organizers

I sent the letter by email the day after I accepted the invitation. A week later, I had a call with an organizer to discuss the content of my talk. I brought up the inclusion rider at the end and he explained that they shared my concern and that a woman on the organizing committee was forceful about it. I thanked him and said that I would be keeping up with their efforts.

About a week later, I received an email response from another organizer. She thanked me for bringing up the issue and said that they were inspired to see speakers take concrete steps. She went on a tangent about other events organized by the same people that were promoting women in IT. About the conference at hand, she explained that they had already 25% of women speakers and that 50% of their pending invitations were with women. She also mentioned that they bring up the Women in Tech Manifesto with their sponsors (IT companies), encouraging them to send as many women representatives as possible.

I was pleased that they had taken the time to think about it and reply at length. I was a tad disappointed that they were still only at 25% women and that they did not bring up the question of minorities. I wanted to reply as such to them, but after hesitating on the right approach, it slipped my mind. 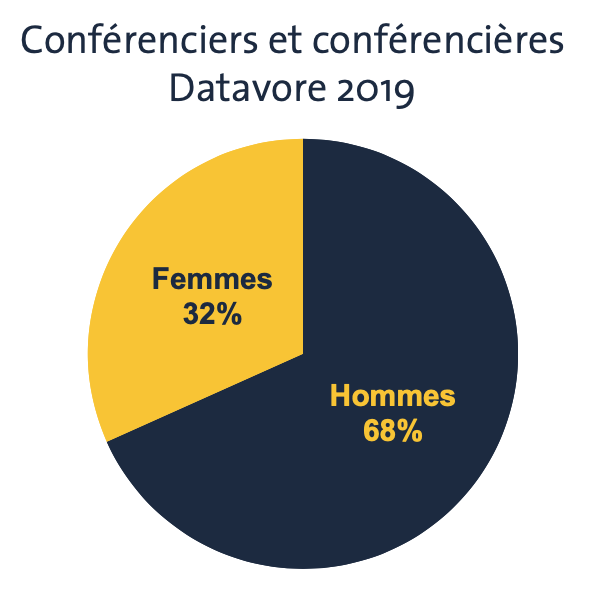 Since my talk was about data visualization, I decided to use the data about the final gender distribution of the speakers for one of my slides. Turns out that it reached almost 32% of women, which is an improvement over the previous year, and does not count the representation of minorities — which is harder for me to measure as an outsider.

While at the conference, I discovered that my letter had started a conversation among the organizing committee. They had questioned how much they do to include women and it led to the creation of a panel on women in IT. The panel was comprised of four women, lasted 35 minutes and was held in the largest conference room of the event, under the theme of “inspiring conferences”. I was not able to attend unfortunately. One organizer also said that he, also a white male, would consider having an inclusion rider next time he’s invited to speak.

An assessment of the experience

I’m a person with very little power, not a celebrity and not an A-lister anywhere but in my family’s heart. Yet, I’m a white man. By bringing this up, I showed that this is an issue that bothers more than the people that are excluded.

I’m satisfied with the outcome, especially that it started a conversation among the committee members leading to tangible action. I want to praise the Datavore team for their openness and how they reacted in general. I did not take it for granted when I sent my letter.

I could have done better. I did not go very far in my inclusion rider. I simply asked them to match their performance of the previous year and I did not follow up on the question of the minorities. Another issue of course is that this is my story, that of a white man again, and that the focus should be on the missing women and minorities, not me.

Still, I hope though that this post can inspire and inform others who may have heard of inclusion riders and wondering if it is something that they can do to contribute to improving diversity and inclusion in their field. My advice is this: just do it.