The daily difficulties of honeybees

The public is generally aware of the challenges wild bees face because of the potential impact on pollination and agriculture. But what about domesticated honeybees in particular? 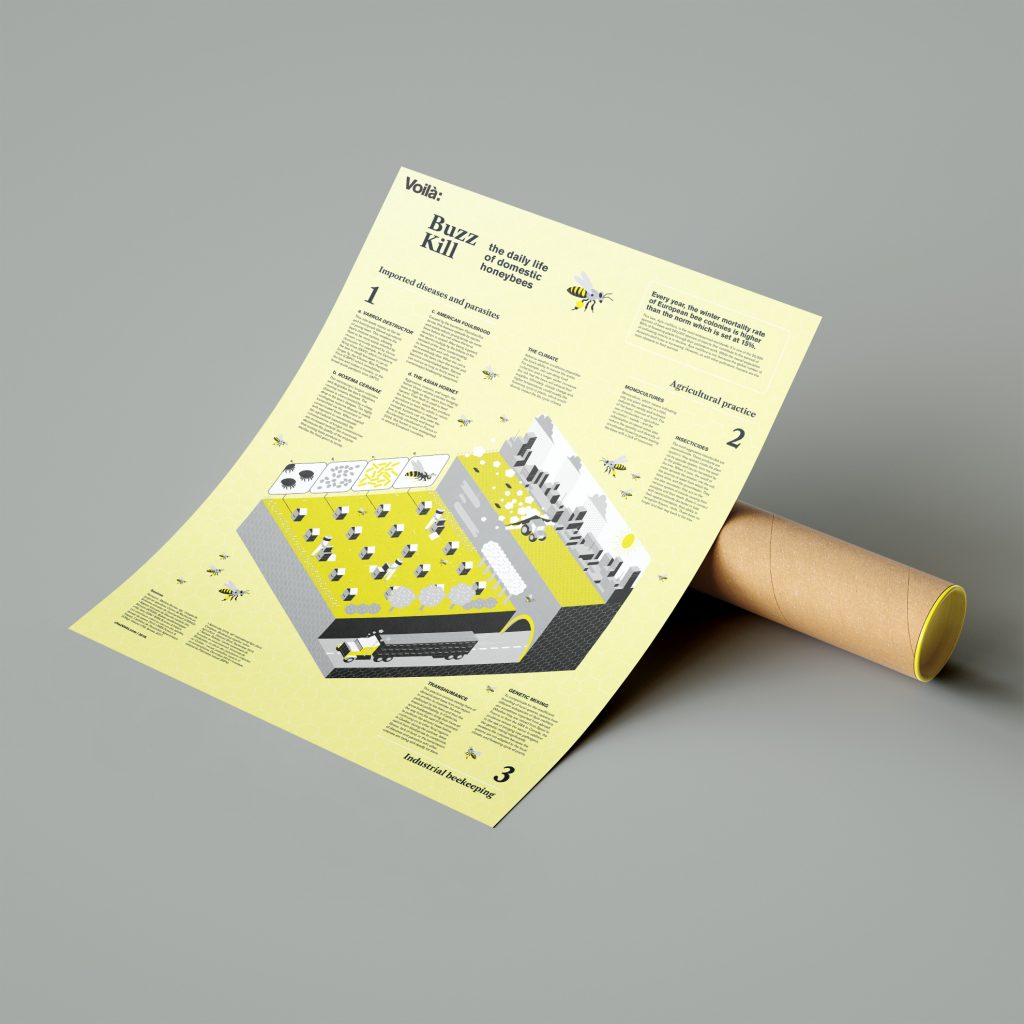 For several decades, all types of bees, not just domesticated honeybees, have suffered because of human activities: pollution, diseases, parasites, overworking of the hives… The list is long and their impact on domestic or wild colonies is no longer news to our ears.

We have decided to produce a poster on the current situation of honeybees to raise public awareness of the significant obstacles that a small insect can endure.

All of the content has been scientifically verified by Martine Bernier, beekeeping project manager at the Centre de recherche en sciences animales de Deschambault (CRSAD). 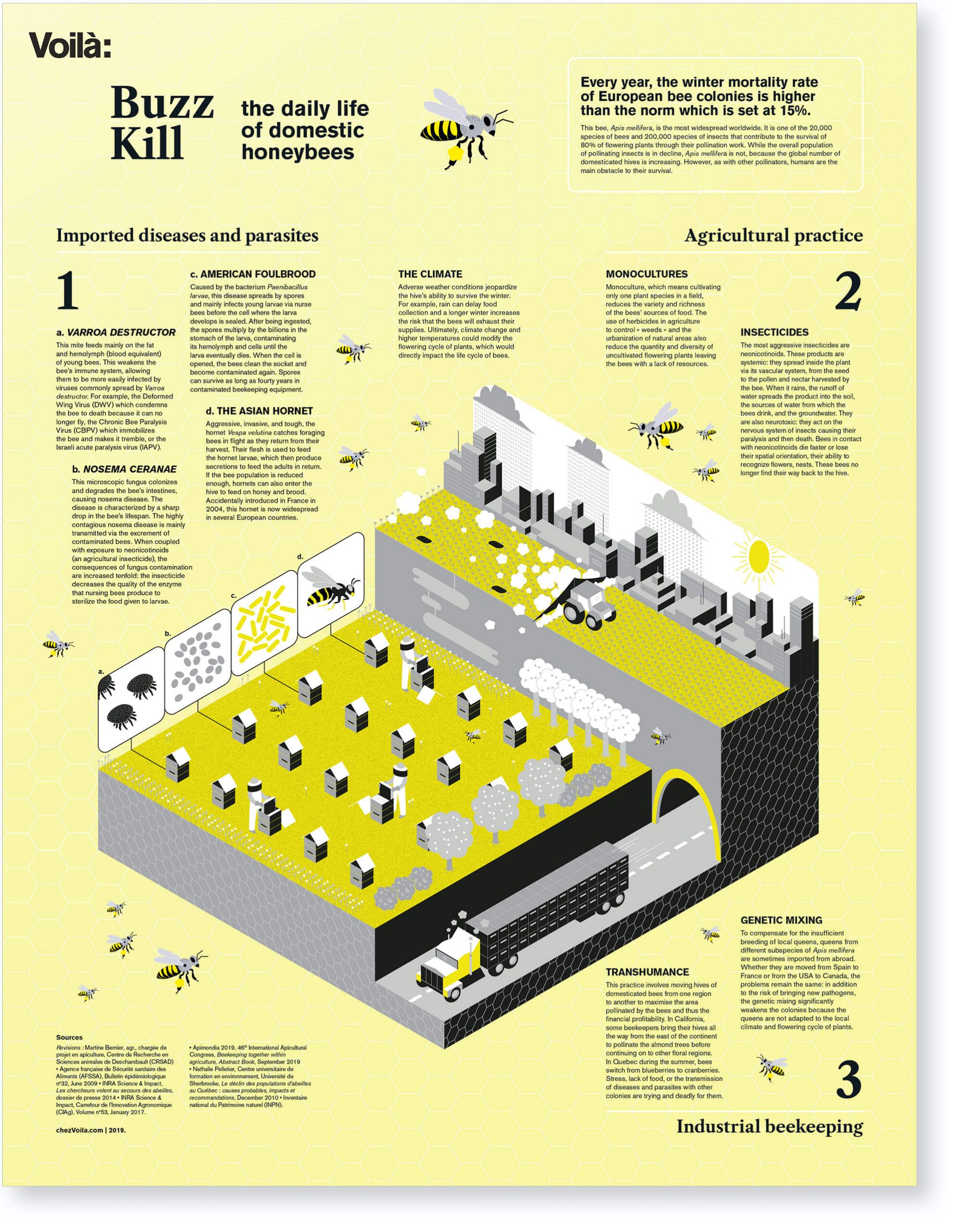 The isometric representation allows us to tell a story in a structured, almost mechanical, way. Even the humans on the page are “dehumanized” because they have no faces.

So, in a limited amount of space, while a beekeeper opens his beehive ravaged by varroa destructor, a truck takes its cargo of bees to pollinate California almond trees, and a farmer spreads pesticides on his field to protect it from pests at the edge of an ever-expanding city, under the growing threat of climate change. 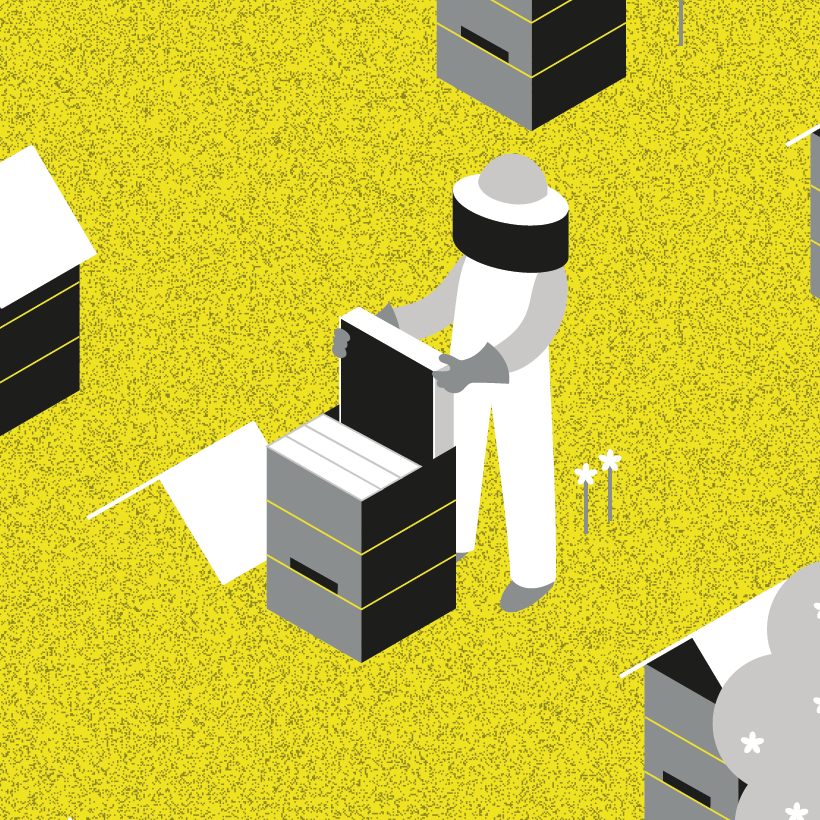 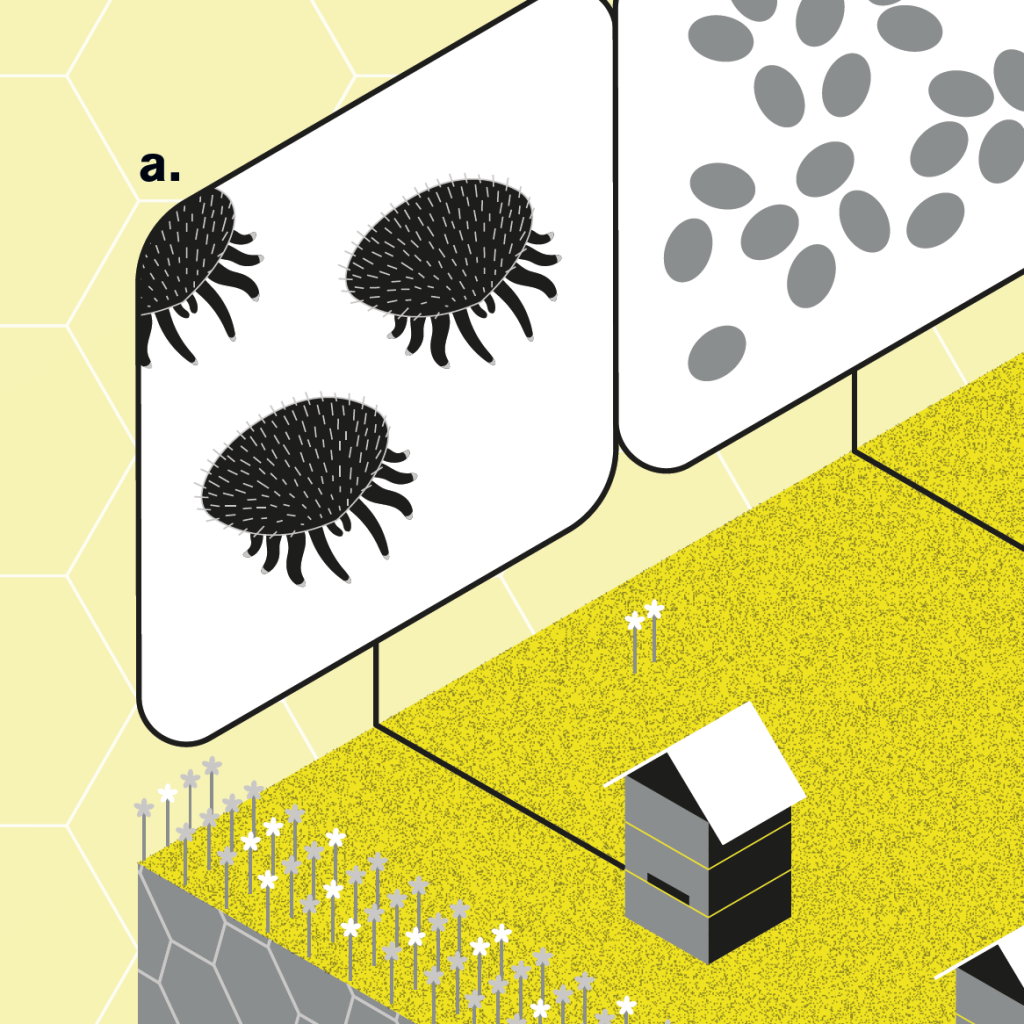 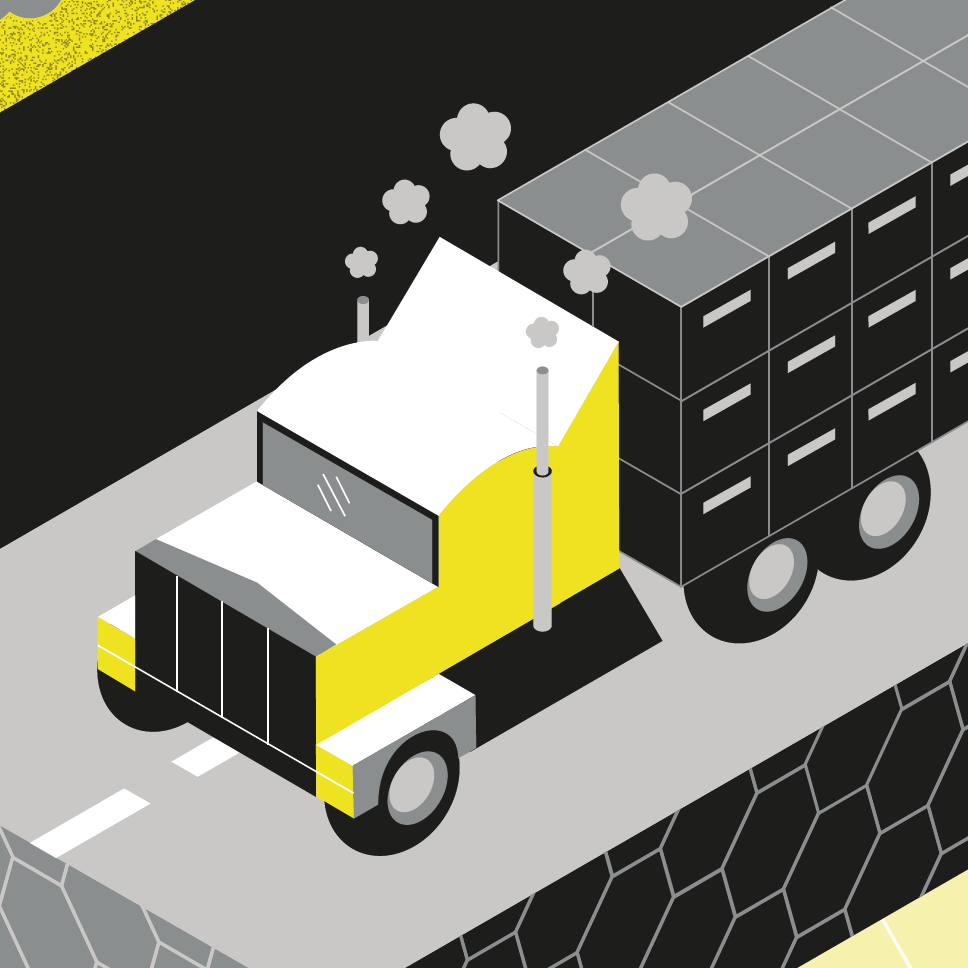 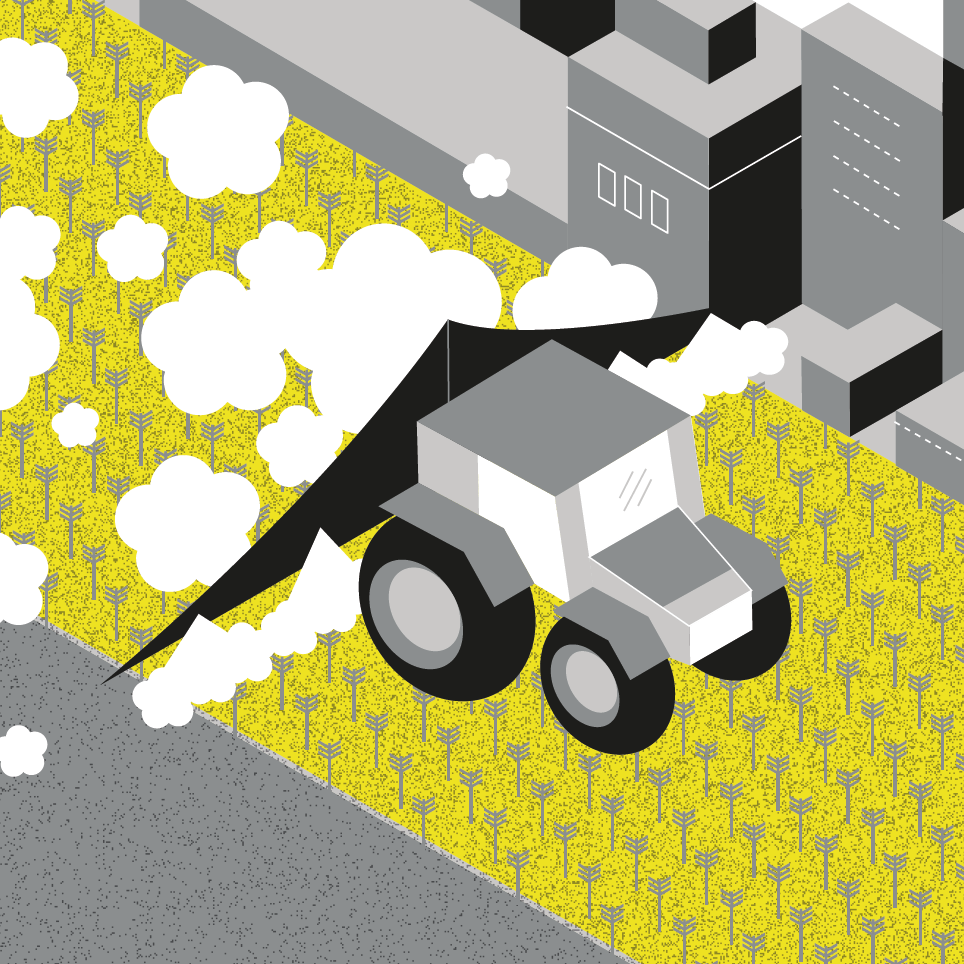 The illustration was not constructed randomly; Each “obstacle” has its own designated area: agriculture and urban life, contaminated hives, transhumance (the seasonal moving of hives) and climate have been distributed according to an approximate percentage of severity estimated by Ms. Bernier, although these figures may vary in certain regions of the world.

So, the area containing the four sources of disease and parasites is the largest and  represents the greatest threat to hives today. Climate currently has the least impact out of the four main threats – but for how much longer?

The overall shape could be said to resemble that of an open hive. 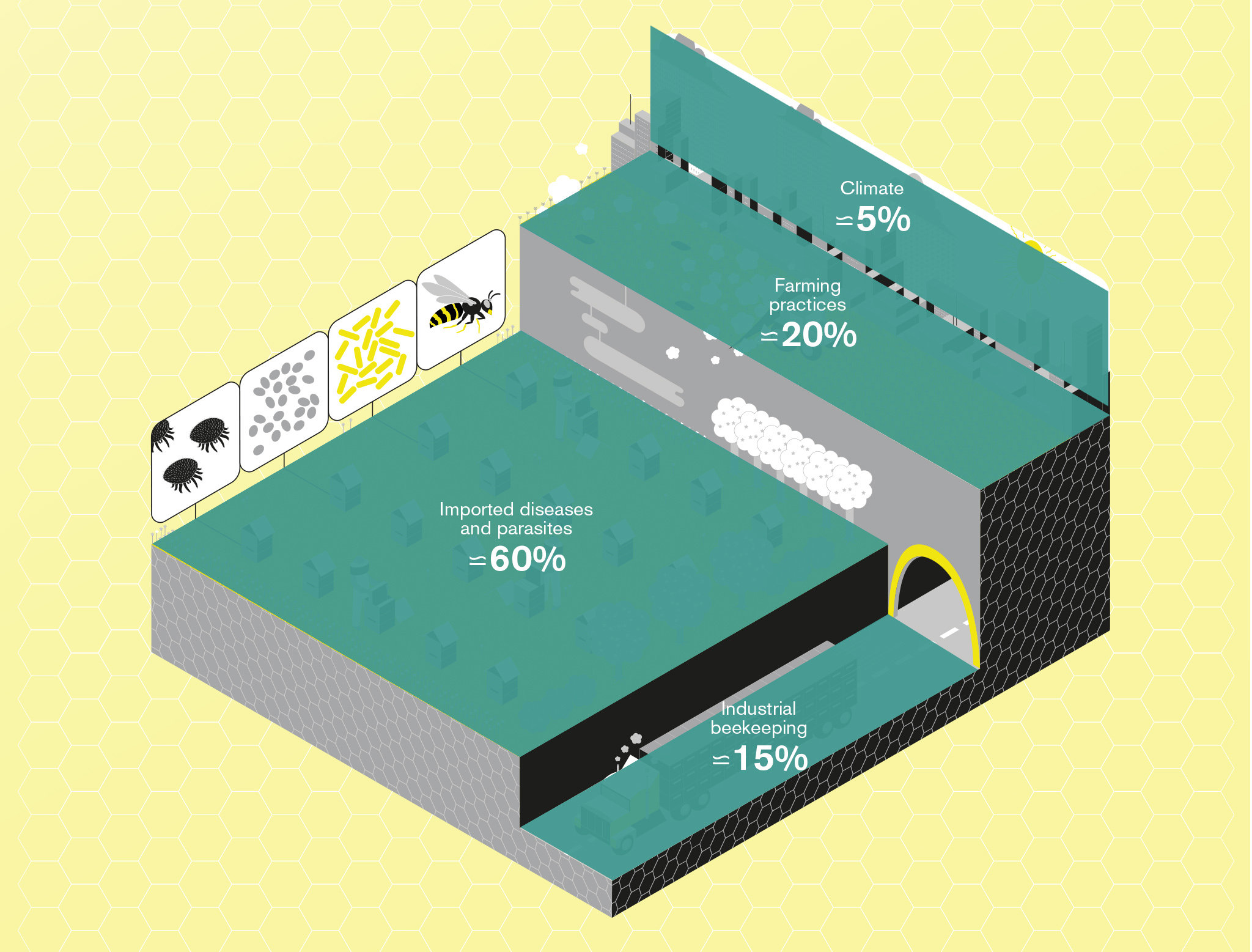 At Voilà:, we are committed to protecting the environment and for our first scientific illustration project, the daily life of honeybees has proven to be an excellent field of experimentation.

To learn more about how this illustration was created, check out our Behind the Scenes blog post.

A theory of change for inclusive businesses
How to present the way in which a new development organization intends to change the world?
Client: FinDev Canada
Year: 2019
See the project
Toward a clean world for all
An independent evaluation found out that the World Bank Group is underinvesting in a major environmental problem. How to get this point across at a busy international conference?
Client: Independent Evaluation Group of the World Bank Group
Year: 2018
See the project